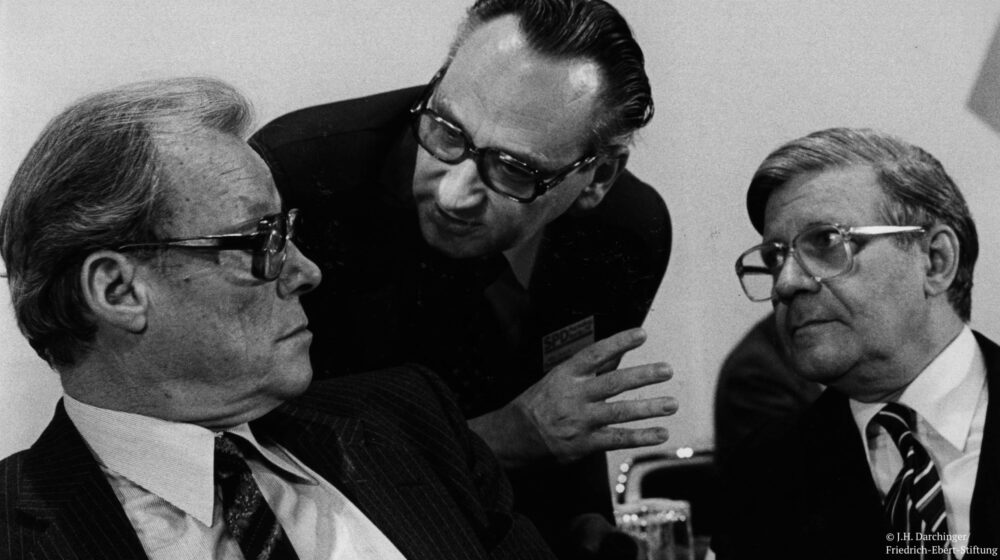 Voices on and opinions about Willy Brandt from friends, opponents, and the media

A Selection from Eight Decades

“He is only 44, which is young for his post, and has the face of a kindly, thoughtful but determined boxer. He speaks well, with calm and sincere emphasis, and meets the Press with a directness and charm which disarm criticism. He photographs well, which is not the least of his assets in the television age, and has a very wide appeal among the all-important women voters. To most Berliners he seems to represent youthful vigour, courage and sincerity. He speaks almost perfect English.”
The Times (London), 9 December 1958

“Today when Willy Brandt passes, many a West German politician declares confidently: “There goes the future Chancellor of Germany.” If Willy can ever realize his dream of modernizing the Socialist Party’s policies, they may prove right.”
Time Magazine (New York), 25 May 1959

“He has always given the impression of somebody who talks sense, with dignity and compassion – not too common a combination among politicians to be taken for granted.”
The Times (London), 28 February 1970

“Viewed from this side of the Channel, there has never been a better German Chancellor than the one who visits us this week. (…) His anti-Nazi background, his doughty performance as West Berlin’s Mayor in critical years and his consistent dignity have won him wide respect.”
The Daily Telegraph (London), 2 March 1970

“Brandt has mastered the sine qua non of the politician today – television. He comes across not as clever performer but as the good German speaking straight common sense to his fellow Germans.”
Washington Post, 29 April 1970

“For Herr Brandt to take the initiative in making overtures to Poland showed both realism in foreign policy and a high degree of political courage at home, a bold resolution far greater than that showed by Adenauer in dealing with the Western Powers.”
The Observer (London), 13 December 1970

“Willy Brandt is the first West German statesman willing to accept the complete consequences of defeat: the lost land, the admission of moral responsibility, the acknowledgment of Germany’s partition. In the process, he is also challenging the Communist countries to expand their dealing with the West, and indirectly, to allow wider freedom for their own people. (…) He has projected the most exciting and hopeful vision for Europe since the Iron Curtain crashed down.”
Time Magazine (New York), 4 January 1971

“For never in the past has there been in the saddle of Germany, and only very doubtfully will there be in the future, a man of greater decency and more devotion to democratic practice and peaceful ideals than Willy Brandt.”
Washington Post, 15 June 1971

“Brandt has led his country – and Western Europe with it – more than half way towards a more civilised arrangement of the Continent’s affairs. Even if negotiations get no farther than they have already, all Europe will have reason to be grateful to Willy Brandt. He received less support than he might well have expected from Britain and France, more than he might have expected from the United States and none at all that was helpful from his political opponents in Bonn. The leadership and the credit were his alone.”
The Guardian (London), 18 September 1971

“As Mayor, Foreign Minister and Chancellor, Willy Brandt has done more than any other German to dissipate the image of a West Germany headed for neo-Nazism and bent on revenge.”
The New York Times, 21 October 1971

“In a world not at the moment conspicuous for statesmen of the first rank, or even for politicians of ability, he stands out as a man who has pursued laudable aims with vigour and intelligence. He is a good German, a good European, and, in so far as it is possible to define such an animal, a good citizen of the world.”
The Times (London), 21 October 1971

“Willy Brandt, who as Mayor of West Berlin in 1961 watched in frustration the building of the wall that cut the city in two, shows even more pleasure than other West German leaders at the events that have rendered it irrelevant.”
The New York Times, 14 November 1989

“But he did not speak as a partisan, and by shouting “Willy! Willy!” while local Social Democrats spoke, the majority of the tens of thousands who filled the market squares of both towns [in Plauen and Zwickau] made clear that they had not come to hear Social Democratic campaigners but to hear a recognized leader of all Germany. Mr. Brandt was elected honorary president of East German Social Democrats today.”
The New York Times, 25. February 1990

“By the time of his death, the Social Democratic leader had lived to see East and West Germany united and the Iron Curtain torn down. His tenure as Federal Chancellor of West Germany from 1969 to 1974 was a turning point in the history of the German people, and he himself was a figure of conciliation in both the domestic and foreign policies of a divided nation. (…) He also came to symbolize a Germany of peace, tolerance and a measure of modesty – qualities that had been erased from the image of Germans during the catastrophic rule of Hitler. (…) His major achievements began in 1970. Supported by only the thinnest of parliamentary majorities, he guided West Germany through arduous negotiations that eventually led to normal relations with the Soviet Union, Poland and East Germany and the easing of tensions in Central Europe. (…) From the beginning of World War II, Mr. Brandt had been animated by the belief that Germany’s only real future lay in a united Europe, and this thread formed the fabric of Ostpolitik. Mr. Brandt had signalled the change when he took office in October 1969, declaring, “I will not be the Chancellor of a conquered Germany, but of a liberated Germany!” Behind the declaration there was also Mr. Brandt’s determination to end two decades of hostility between West and East Germany. This was the national component of his Ostpolitik. (…) Mr. Brandt had overcome enormous adversities throughout his life: His birth was illegitimate and he was a political exile in Norway in the Nazi era, until his return to Germany in 1948. (…) In Warsaw he knelt at a memorial to the Jewish victims of Nazi barbarity in a gesture of atonement noted around the world. (…) After the Berlin wall fell in November 1989, Mr. Brandt was welcomed by huge crowds of East Germans who saw in him a West German leader who had never stopped caring for their destiny during all their years of bondage.”
The New York Times, 9 October 1992

“As if acknowledging the weight of a terrible past, Mr. Brandt fell wordlessly to his knees before a memorial to Jewish victims of Nazi savagery. The great Social Democrat never stood taller. (…) A generous and passionate man, Willy Brandt helped build a new republic and gave a postwar generation cause for pride in being German. It is a considerable memorial.”
The New York Times, 11 October 1992