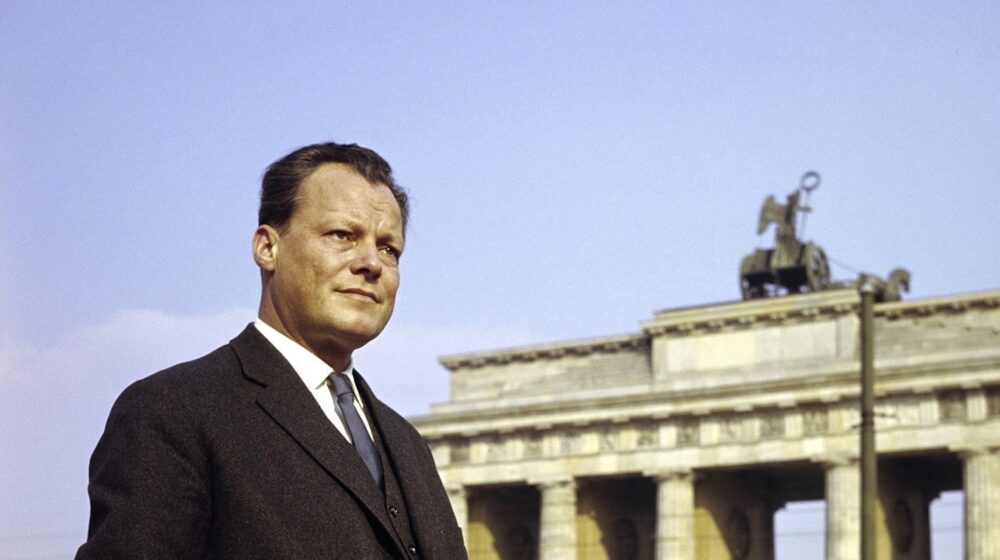 Willy Brandt is regarded as one of the outstanding statesmen of the 20th century. Born into a working-class family in Lübeck, he made his way to Berlin and Bonn by way of Oslo and Stockholm and left behind an international political legacy. Whether as a social democrat, opponent of the Nazis, governing mayor of Berlin, foreign minister, federal chancellor, Nobel Peace Prize recipient or international statesman: Willy Brandt constantly devoted himself to freedom, peace, democracy and justice.

Youth in Lübeck and Exile in Scandinavia

Willy Brandt is born in 1913 into Lübeck’s working-class milieu. At the early age of sixteen he already joins the SPD (Social-Democratic Party of Germany). In 1933, when the national socialists put an abrupt end to democracy in Germany, Brandt flees to Norway. From there he continues to offer resistance to the NS regime, which revokes his citizenship in 1938. During the Second World War he finds asylum in Sweden where he continues his political struggle against Hitler’s dictatorship.

Politics in a Divided Berlin

In 1948, after his return to Germany, Willy Brandt’s political ascent in Berlin’s SPD begins. He becomes governing mayor in 1957. He passionately defends West Berlin’s freedom and leads the city out of the severe crisis following the construction of the Berlin Wall in 1961. Willy Brandt runs as the SPD’s candidate for the chancellorship in the 1961 and 1965 elections to the Federal Diet. He assumes the national chairmanship of the party in 1964. His political opponents constantly malign him because of his illegitimate birth and his activities in exile.

Late in 1966 Willy Brandt becomes foreign minister and vice-chancellor in the Grand Coalition. A shift in political power comes with the Federal Diet elections of 1969. The social-liberal coalition of SPD and FDP elects Brandt as the first social-democratic federal chancellor. His government brings about internal reforms and enacts policies to “risk more democracy”. It advances the unification of Europe and initiates new policies affecting East and West Germany. For those accomplishments, Brandt is awarded the Nobel Peace Prize in 1971. In April of 1972 a parliamentary vote of no confidence against him fails. In the early Federal Diet elections in November of 1972 Brandt achieves a landslide victory. In May of 1974 he resigns as chancellor because of the Guillaume espionage affair.

Willy Brandt remains chairman of the SPD until 1987. In addition, he becomes president of the Socialist Internationale in 1976. In that capacity he advocates on an international scale for peace, democracy and human rights. In 1980 he presents a report by the International North-South Commission which he chairs. It makes ground-breaking recommendations for global development policies.

For the sake of securing peace, in the 1980s Willy Brandt opposes nuclear armament. When the communist dictatorships collapse in 1989, the honorary chairman of the SPD sees a major opportunity for the free nations of Europe to unify. With all his strength he supports German unification in 1990, which his policies made possible in the first place. On 8 October 1992, Willy Brandt dies in Unkel near Bonn.