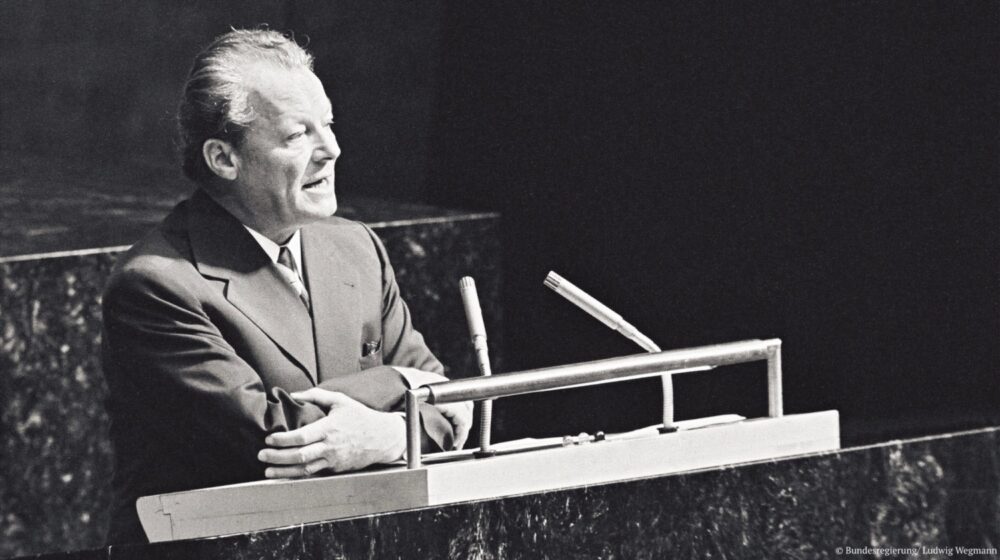 A selection of Willy Brandt’s quotes

“We want to dare more democracy” became the guiding principle of Willy Brandt’s chancellorship. He is still being quoted like almost no other statesman. He is the originator of many famous dictums that are used to this day.

Selection of his famous quotes

“Our task is to be a revolutionary vanguard.”
Willy Brandt, 17 January 1932

“The discipline of the Third Reich is toadyism and not freedom. Its anti-Semitism and its inflammatory nationalist propaganda are narrow mindedness and not intellectual breadth. Fascism is intellectual slavery.”
Willy Brandt about the Nazi dictatorship in an article in “Norges Gymnasialblatt”, April/May 1933

“Everything indicates that the fascist dictatorship is not a question of weeks and months, but of years.”
Willy Brandt, June 1933

“I feel bound to Norway with a thousand ties, but I have never given up Germany – the other Germany. (…) The day will come when the hatred that seems unavoidable in war will be overcome. One day the Europe in which Europeans can live must become a reality.”
Willy Brandt, August 1943

“Unconditional acknowledgement of the crimes that were committed against other peoples by Germans and in the name of Germany is the first precondition for a recovery of the German people.”
Willy Brandt, 9 February 1945

“The Germans must bear responsibility. But responsibility is not the same as guilt. Those who do not feel guilty and are not guilty of the Nazi crimes nevertheless cannot escape the consequences of a policy, which a far too large part of the German people had willingly joined.”
Willy Brandt in his book “Verbrecher und andere Deutsche” (“Criminals and the other Germans”), 1946

“Whoever becomes involved with the United Communist Front will go down the drain with it!”
Willy Brandt, 12 March 1948

“With the 17th of June 1953 a new chapter in the strive for the reunification of Germany has begun. (…) The 17th of June was the most urgent appeal to our own people and to the entire world that the division of Germany cannot continue forever.”
Willy Brandt in his brochure “Arbeiter und Nation”, 1954

“Dictatorship is dictatorship. Exploitation is exploitation. Our place is and remains clearly on the side of freedom and social progress, of the struggle for social security and the humanising of human society.”
Willy Brandt, 22 May 1955

“It is the clearly perceptible goal of Communist policy to incorporate all of Berlin into the so-called ‘GDR’. No amount of rhetoric can distract from that.”
Willy Brandt, 27 November 1958

“The day will come when the Brandenburg Gate will no longer stand at the border.”
Willy Brandt, 1 May 1959

“A clique which calls itself a government has to try to fence in its own population. The concrete columns, the barbed wire, the death strips, the watch towers and the machine guns, those are the hallmarks of a concentration camp. It will not stand.”
Willy Brandt, 13 August 1961

“We want to be and to become a nation of good neighbours, both domestically and abroad.”
Willy Brandt, 28 October 1969

“Respect for the politically mature citizen demands that he not be sheltered from difficulties.”
Willy Brandt, 14 January 1970

“There is nothing lost with this treaty which had not been squandered away a long time ago.”
Willy Brandt in his television address to federal citizens after the signing of the Moscow Treaty, 12 August 1970

“History, as bitter as it may be, is a reality which each and every day continues to affect our present and our future.”
Willy Brandt in an address in Jerusalem, 7 June 1973

“The wealthy nations will not remain wealthy if the poor houses of humanity increase.”
Willy Brandt, 26 November 1976

“I belong to a generation which has experienced twice how hunger results from war. That is why I would not like to see a new generation experience how war can result from hunger.”
Willy Brandt in an interview for the journal “Bild der Wissenschaft”, 1979

„The globalization of dangers and challenges – war, chaos, self-destruction – calls for a domestic policy which goes much beyond parochial or even national items.“
Willy Brandt in his introduction to the North-South Report, 1980

“Peace is not everything, but everything is nothing without peace.”
Willy Brandt, 3 November 1981

“The experience we have had is that – with all due respect to Russian power and my own interest in having reasonable relations – Russia as a superpower just does not have the inner strength to digest Poland and Czechoslovakia and Hungary, to take these countries. They belong to Europe.”
Willy Brandt, 29 September 1983

“The shocking contrast between the well-nourished and the hungry in the world demonstrates every day that fundamental human rights begin with the right to live.”
Willy Brandt, 1987

“If I were to say what is, next to peace, more important to me than anything else, then without qualification my answer would be: freedom. Freedom for many, not only for the few. Freedom of conscience and of opinion. Freedom as well from need and from fear.”
Willy Brandt, 14 June 1987

“I think my real success was in having contributed to the fact that in the world in which we live the name of our country, Germany, and the concept of peace can again be mentioned in the same breath.”
Willy Brandt, December 1988

“To the sum total of my life belongs the insight that there is no complete hopelessness.”
Willy Brandt in his memoirs ”Erinnerungen”, 1989

“Now what belongs together will grow together. This applies for Europe as a whole.”
Willy Brandt, 10 November 1989

“Wherever people are afflicted with grave suffering, it affects us all. Don’t forget: Whoever allows an injustice to continue for long is preparing the way for the next one.”
Willy Brandt, 15 September 1992

“I sought and found a home in the youth movement, first the Falken (the Falcons), then in the Socialist Labour Youth organization.”
Willy Brandt in his memoirs “My Life in Politics”, 1992

“Nothing happens of its own accord. And very little is lasting. Therefore – be aware of your strengths and of the fact that each era requires its own answers and you really must feel up to its expectations if you hope to achieve good things.”
Willy Brandt, 15 September 1992