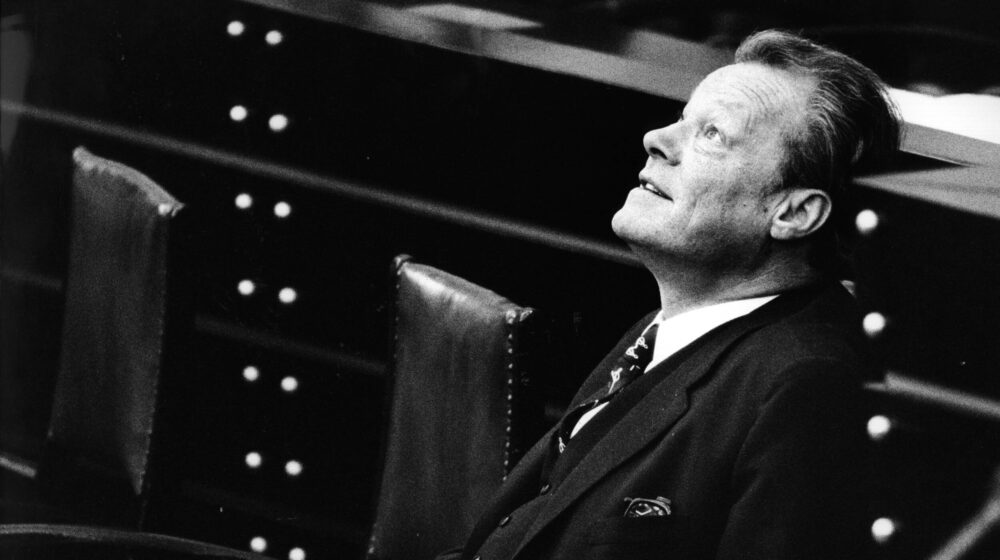 On 20 October 1971, Willy Brandt is awarded the Nobel Peace Prize by the Nobel Committee.

On 20 October 1971, the Nobel Committee in Oslo announced that it had awarded Chancellor Willy Brandt the Nobel Peace Prize for 1971. With this award, the committee recognised above all Brandt’s efforts to bring about understanding between the Federal Republic of Germany and its Eastern neighbours through a new “Ostpolitik” and to make peace in Europe more secure. Willy Brandt was the fourth German to receive the Nobel Peace Prize.

Bundestag session in Bonn, 20 October 1971: In the debate on the federal budget for 1972, the social-liberal coalition and the CDU/CSU opposition argued harshly with each other – as in almost every session since the Brandt government took office two years earlier. But shortly after 5 p.m., calm returned to the plenary chamber for a moment when president of the Bundestag Kai-Uwe von Hassel (CDU) surprisingly interrupted the session and announced: “I have just received the news that the Nobel Prize Commission of the Norwegian Parliament has today awarded the Nobel Peace Prize to the Federal Chancellor of the Federal Republic of Germany.”

Applause in the Bundestag for Willy Brandt

Immediately, all MPs of SPD and FDP, as well as the cabinet members on the government bench, rose to lively and sustained applause. As the minutes further note, members of the CDU/CSU parliamentary group also applauded, but the majority remained seated. After a few seconds of pause, Willy Brandt also rose from his seat to bow briefly to the parliamentarians – with an almost petrified expression and at the same time visibly deeply moved. He then accepted the congratulations of the parliamentary party leaders Herbert Wehner (SPD), Rainer Barzel (CDU/CSU) and Wolfgang Mischnick (FDP). 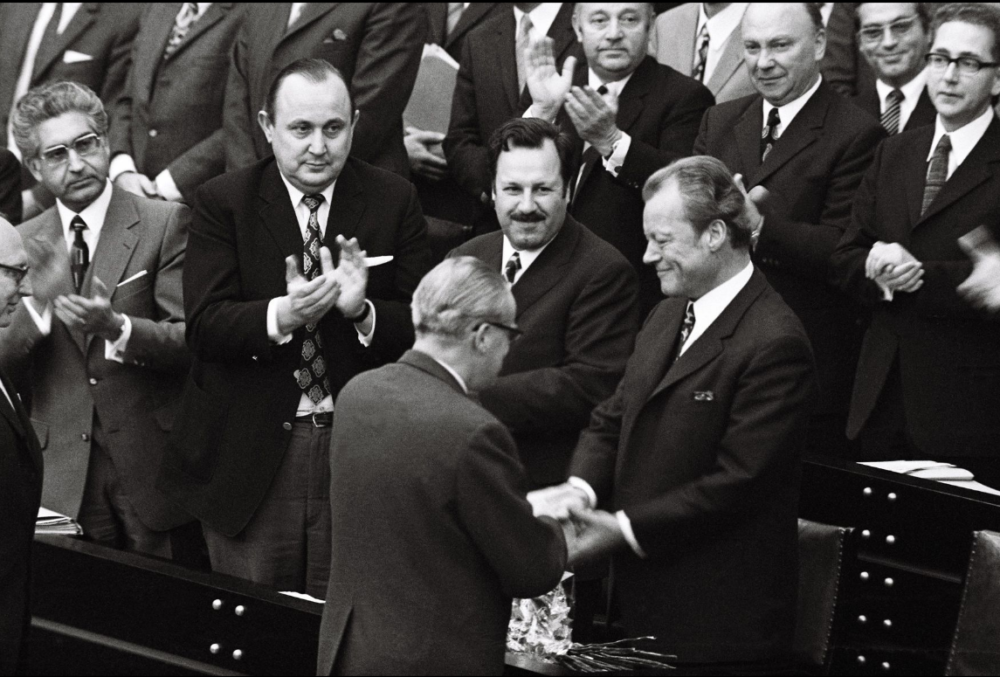 Willy Brandt: “I will do my utmost to prove myself worthy of this honour in my further work.”

President of the Bundestag von Hassel congratulated with the following words: “Chancellor, this award honours your sincere efforts for peace in the world and for understanding between peoples. The entire German Bundestag, without distinction of political locations, congratulates you on this high honour.” In a short speech of thanks, Brandt declared: “This is a high and very obligatory honour. I will do everything to prove myself worthy of this honour in my further work.”

Willy Brandt had known about the award of the Nobel Peace Prize since early afternoon. At 2 p.m. the Chairwoman and Secretary of the Nobel Committee, Aase Lionæs and August Schou, had sent a telegram to the Chancellor saying, “The Nobel Committee of the Norwegian Storting has today awarded you the Nobel Peace Prize for 1971 stop The prize amount is 450,000 Swedish kroner stop The announcement will be published at 5 p.m. Norwegian time stop Letter will follow.” 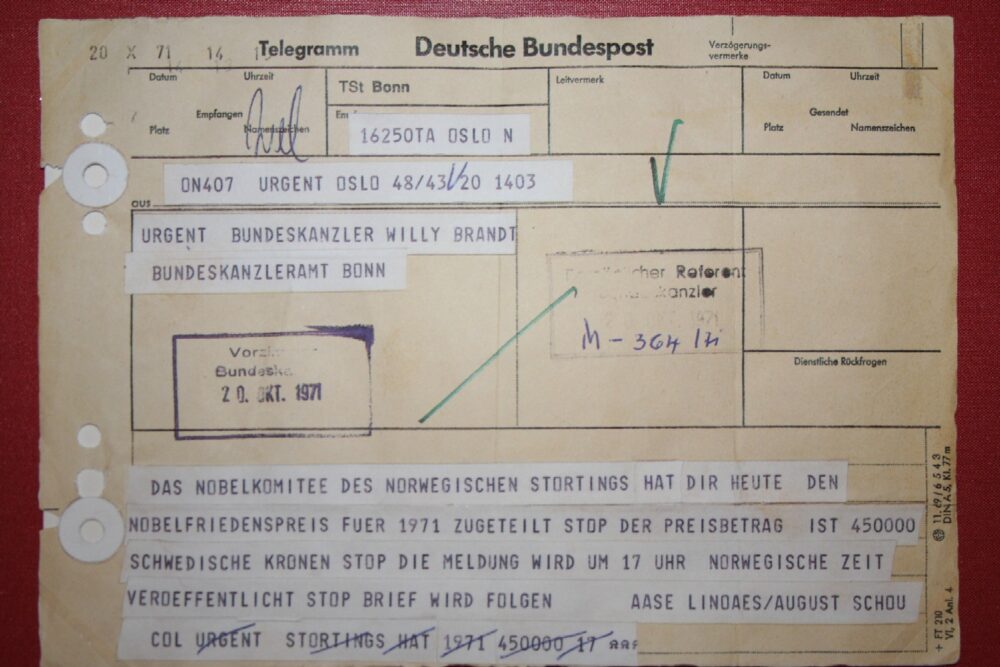 Explanation of the Nobel Prize Committee

The Nobel Committee’s explanation said: “Chancellor Willy Brandt, as head of the West German government and on behalf of the German people, has extended his hand to a policy of reconciliation between old enemy countries. He has made an outstanding effort in a spirit of goodwill to create conditions for peace in Europe.” As Foreign Minister and as Chancellor, Brandt had taken concrete initiatives for political and military détente between Eastern and Western Europe. The Committee particularly emphasised that under his government the Federal Republic had signed the Nuclear Non-Proliferation Treaty in 1969 and had concluded non-violence agreements with the Soviet Union and Poland in 1970. At the same time, however, reference was made to Willy Brandt’s efforts “to secure basic human rights such as personal security and full freedom of movement for the population of West Berlin”. The Committee also praised his commitment and initiatives for increased cooperation in Western Europe within the framework of the European Community as an important contribution to peace.

Nominations for the Nobel Peace Prize 1971

The files of the Nobel Committee, which are partially accessible after 50 years, show that in 1971 a total of 32 persons and 7 institutions had been nominated for the Nobel Prize. Among the nominees were also some politicians with whom Willy Brandt worked: the French European politician Jean Monnet and two Scandinavian social democrats, Tage Erlander from Sweden and Einar Gerhardsen from Norway. Other candidates included the American publicist and Holocaust survivor Elie Wiesel, the Polish Cardinal Stefan Wyszyński and the founder of the Pan-European Movement, Richard Nikolaus Coudenhove-Kalergi.

Brandt’s nomination was due to the World Federation of Twin Towns (“La Fédération Mondiale des Villes Jumelées”), the Social Democratic parliamentary group in the Danish parliament and the German-American social psychologist, physicist and journalist Wolfgang Yourgrau, who, like Brandt, had been a member of the SAPD in the 1930s.

Internationally, the Nobel Committee’s decision was met with a very positive response. The New York Times wrote on 21 October 1971: “Willy Brandt is no ordinary statesman nor ordinary politician. As a youth he courageously fought Nazism and was forced to flee Germany in the first year Hitler’s rule. As a political leader he has never hesitated to remind his countrymen bluntly of the heavy burden of the Hitler legacy. (…) Mr. Brandt has proceeded with imagination but without illusions to make a distinctive German contribution to a wider effort to build detente in Europe. (…) As Mayor, Foreign Minister and Chancellor, Willy Brandt has done more than any other German to dissipate the image of a West Germany headed for neo-Nazism and bent on revenge. The award announced yesterday in Oslo is impressive tribute to his success.”

Willy Brandt was only the fourth German to be awarded the Nobel Peace Prize, after Gustav Stresemann (1926), Ludwig Quidde (1927) and Carl von Ossietzky (1935). The ceremonial awarding of the certificate and the gold medal took place on 10 December 1971 in the auditorium of the University of Oslo. The prize money was the equivalent of just over DM 300,000. Brandt donated it for the renovation of the oldest synagogue in Venice, which was threatened by decay.

The Federal Chancellor Willy Brandt Foundation commemorates this special historical date with a comprehensive anniversary programme. You can find the entire programme here.

News of the Willy Brandt Foundation 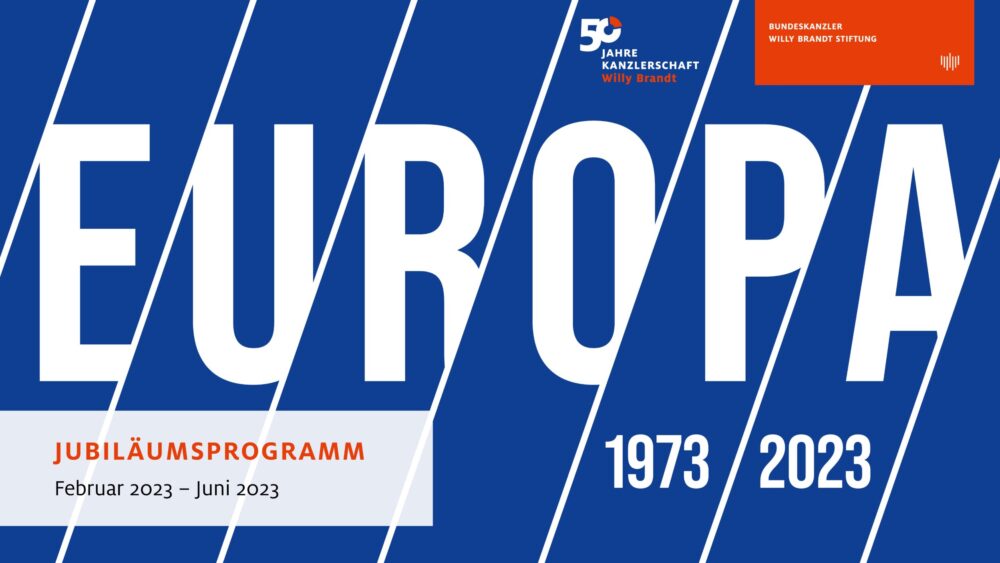 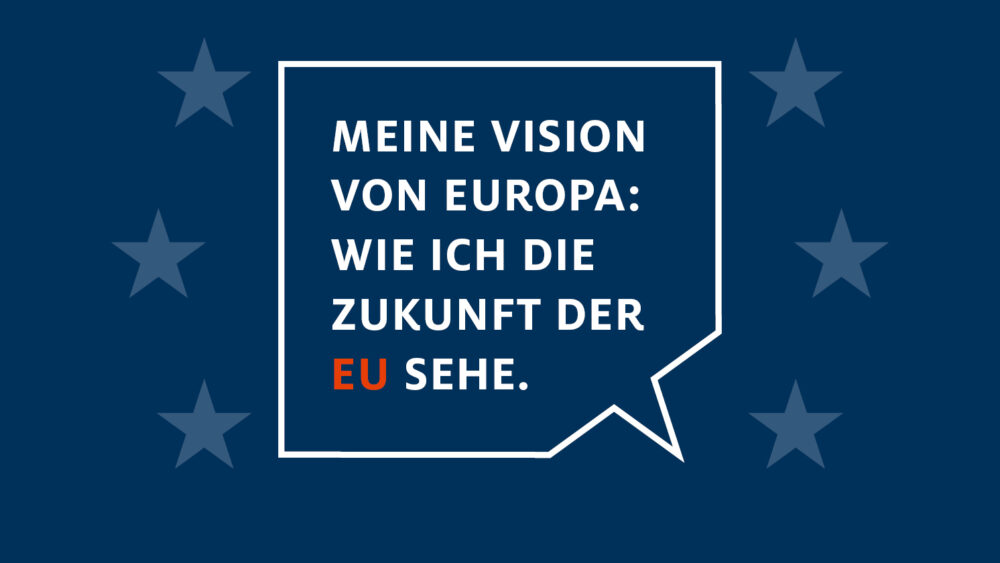